Next Game:  at Columbia

It’s not easy to overshadow a quarterback who throws five touchdown passes and rushes for another, or a fellow receiver who catches 11 passes for 179 yards. But Jesper Horsted did just that during a record-setting performance in Princeton’s dominant home-opening rout of Monmouth Saturday in front of 11,000+ fans on Community and Staff Day. Horsted broke Princeton’s all-time touchdown receptions record during the Tigers’ 51-9 victory over a Hawks team that reached the NCAA tournament last year.

Horsted entered the game two touchdowns shy of Derek Graham’s record of 19, which he set during the 1984 season, but he cut that deficit in half with a 3-yard score in the first quarter. That was a historic play in its own way, as it was the first to ever be reviewed at Princeton Stadium. The Ivy League adopted the replay rule this past season, and officials determined that Horsted did have possession of the ball in the end zone, a play that opened an early 14-3 lead.

The record-tying score came late in the 2nd quarter, a double move that left his defender in the dust for a 29-yard touchdown. By the time John Lovett — you know, the quarterback who has already accounted for 10 touchdowns this season — rushed for a 7-yard score early in the third quarter, the outcome seemed well in hand. The only thing left to decide was whether Horsted would actually break the record in front of his home crowd.

He made it a memorable one. 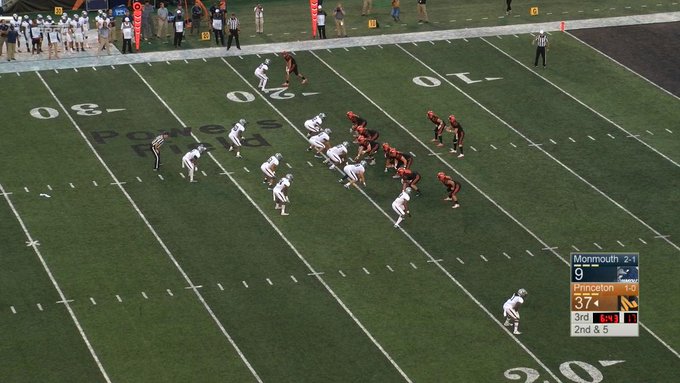 Princeton Football@PUTigerFootball
Jesper Horsted now owns the career record for Princeton TD catches, and he does it in style! An 81-yard score opens a 44-9 lead for Princeton midway through the 3rd quarter. Wow!

Horsted ended the game with eight catches for 150 yards, neither of which were actually team highs. Classmate Stephen Carlson was just as spectacular, scoring two touchdowns to go along with his 11-for-179 effort, including a 24-yard score in the first quarter that opened a 7-3 lead. Lovett ended the day 21-for-27 with 332 passing yards and five touchdowns, as well as 71 rushing yards and another score.

The defense carried over from its dominant showing at Butler and once again held an opponent to single digits. Senior linebackers Tom Johnson and Mark Fossati shared a team high with nine tackles apiece, while Princeton added five sacks and an interception by TJ Floyd. Princeton continuously pressured Monmouth quarterback Kenji Bahar and the explosive Hawks offense, and it ended the game with seven tackles for loss, four quarterback hurries and three breakups. Jackson Simcox and Mike Wagner each had solo sacks for the Tigers, who have yet to allow a second-half point this season. Princeton also held Monmouth to only five third-down conversions on 14 attempts.

Monmouth’s best offensive play of the game actually served as a spark for the Tigers. On the Hawks’ first play, running back Pete Guerriero, a MAAC sprint champion, broke through the line and seemed destined for an 85-yard touchdown. Senior safety Ben Ellis ran him down inside the red zone, and the defense responded by holding Monmouth to a field goal. The Tigers would allow only one more score the rest of the day.

Princeton will now face a short week as it prepares for a nationally televised home opener against Columbia, another unbeaten Ivy League team following its win over Georgetown. Columbia will host Princeton at Wien Stadium Friday at 6 pm in a game televised live on ESPNU.

POSTGAME NOTES: This is the 1st time Princeton has opened a season w/ back-to-back 50-point games since 1886, when the Tigers defeated Stevens Institute in back-to-back weeks … Lovett tied Judd Garrett for third on Princeton’s all-time rushing touchdown list when he scored his 32nd TD; next up is Quinn Epperly, who is second with 38 rushing TDs … Carlson also moved up the all-time list, as he tied Kevin Duffy with his 13th career receiving touchdown … Jeremiah Tyler led Princeton with 1.5 tackles for loss, though nine different Tigers recorded at least a half tackle for loss … senior Dominique Summerville rushed three times in the game and nearly scored his first career touchdown, but the play was called back due to Princeton’s only penalty of the game.

This entry was posted in Uncategorized. Bookmark the permalink.